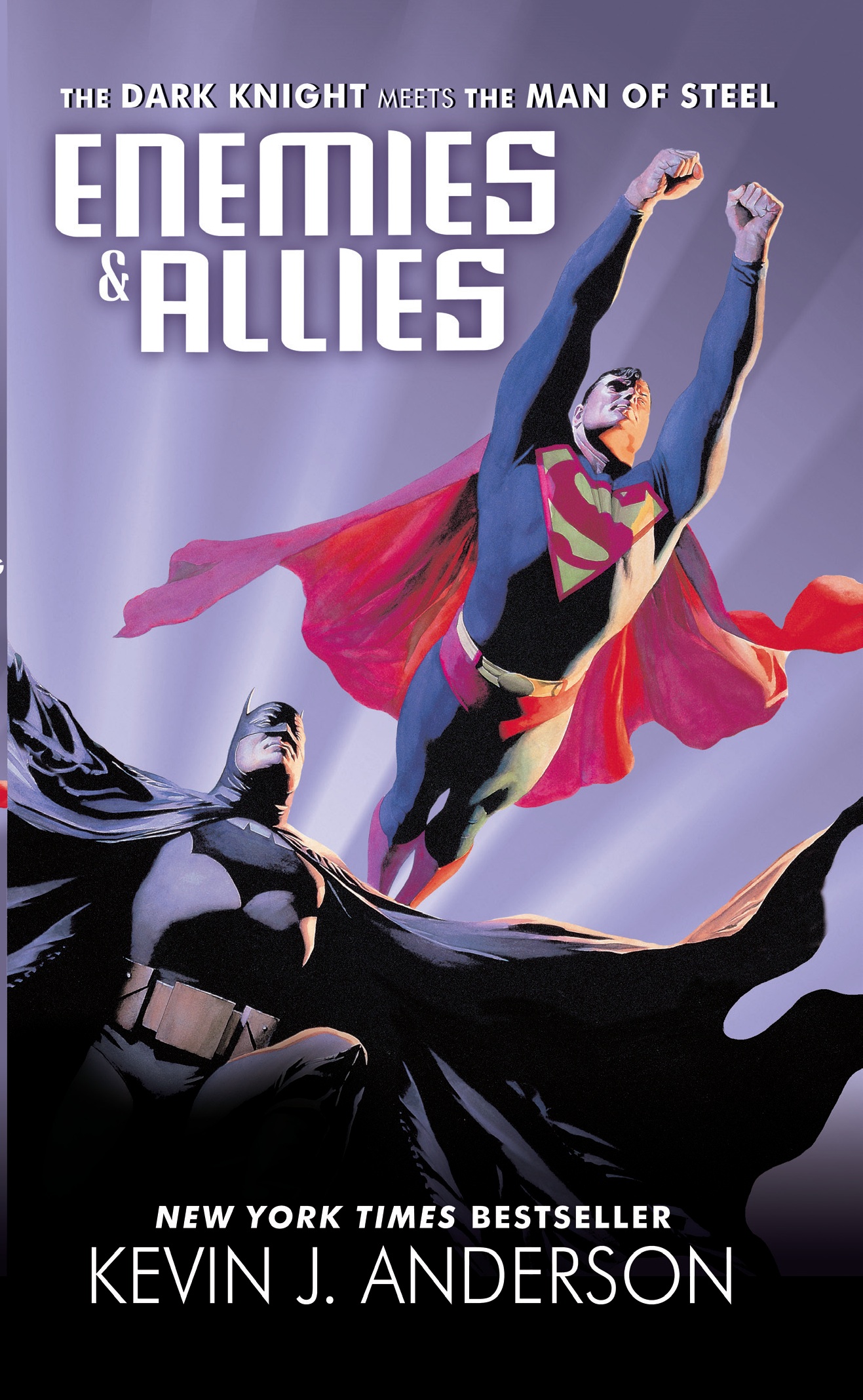 Tagline: “The Dark Knight meets the Man of Steel”

(Note: This is my first (and hopefully not last!) book review since making the personal pledge of not wasting words and make it a point to read all the books in my collection!)

I must admit I was totally suckered into buying this novel at the recent Big Bad Wolf warehouse sale. The staff had sneakily placed it in the Bestsellers section, and I couldn’t resist picking it up, amateurishly duped by the New York Times Bestseller tagline in front of the cover, which also had a catchy visual of Superman and Batman striding forward heroically. Somehow, I totally forgot how many novels also suckered the New York Times to bestow that ‘bestseller’ tag. There are just too many of such NYT Bestsellers around! Ha.

It was only when I started opening the pages of the novel at home did I realise that the ‘NYT Bestseller’ tag was actually referring to the author, Kevin J. Anderson, and NOT the novel itself! Sigh, I really felt conned at that time. However, after flipping through the first few chapters of this novel, I have to say I am really glad I was suckered into buying it because it is truly a refreshing and entertaining read!

The plot is wonderfully set in the background of the post WWII 1950s, where tensions are rising amidst a possible nuclear war between USA and the Soviet Union, and the world were really into UFO sightings, alien invasions, etc.

Both Superman and Batman were introduced into the storyline as heroes in the very early years of their ‘heroing’ careers. Batman was still seen very much like a vigilante, fighting for justice and hunted by the law at the same time; Superman is pictured as a naive young superhero still trying to grasp and adapt to the peculiar world he has come to live in, and protect, of course. The main hook of the novel is Anderson’s depiction of a possible first meeting between Superman and Batman.

With both USA and the Soviet Union anxiously developing В and stockpiling nuclear missles and other weapons in preparation for war, the story introduces us to Lex Luthor as the main villian of the novel, who makes a pact with a Soviet General to create a chaotic situation out of this nuclear crisis which would benefit both of them. When LutherCorp steals some technological designs from Wayne Enterprises, a situation is developed to allow Batman to investigate beyond Gotham City, and eventually into Metropolis and finally resulting in the very first meeting with Superman.

Their first contact is met with much distrust with both Superman and Batman rightfully skeptical about each other’s motives. But as the story moves along, both superheroes slowly starts to earn each other’s respect and trust. Their eventual alliance would be much needed as they work together to battle Luthor and preserve world peace.

What I liked about the plot is that it is kept really simple and straightforward. At times, it felt as though I was reading through a comic rather than a novel! That really made it easy to follow the storyline.

I must say I thoroughly enjoyed Anderson’s work in this novel. He has a clever way of contrasting both super-heroes to the extent that makes their ‘meeting’ and eventual alliance even more likeable. For example, whilst Superman is often portrayed as a headline superhero who saves the world boldly in broad daylight, Batman remains the superhero that only prowls on criminals at night.

The dialogue, although pretty cheesy at times, were written in such simple words that made for light and easy reading.Like I mentioned earlier, this novel is as close as you’ll get to reading a comic! I also liked the generous helpings of humour thrown into the pages every now and then. There was certainly a good mixture of fun meshed in with the tension of the plot as it reached its climatic battle scene.

Of course, there was the solid character development and back story for both Superman and Batman. In a novel where there are two main characters, I think Anderson has managed to get a fairly good balance of ‘spotlight sharing’ throughout the book. Of course, I still felt Superman seemed to get more pages. Sigh, but that’s just me. рџ›

Glue Factor В (difficulty of putting the book down!)

I was happy to see that despite having more than 300 pages, Anderson has expertly split the novel into 60+ chapters, with each chapter comprising of an average of 4-5 pages long. This dissection essentially helps the readers to read the book in small chunks, thus reducing possibility of boredom.В With short chapters to carry the story, I found it extremely difficult to put down the book down because the pacing just keeps me want to read on and on to complete the book!

The simple plot and words also reduced the need to think a lot during the reading. Definitely a plus point that helps any reader to finish a book if it is purely reading entertainment!

A fun yet thrilling read. If you love Superman or Batman, you should love this book too. The writer has managed to imagine a believable storyline to bring these two superheroes together for the first time, although in an alternate timeline that is not in either heroes’ comic canon. If you are not a fan of these two superheroes nor comics, I recommend you to pick it up too, simply for a quick escapade. Who knows, after reading it, you may start to love comics too! рџЂ

I would even further recommend the producers from DC Comics movie studios to seriously consider shooting a movie with a similar storyline. After the recent failures of ‘relaunching’ Superman, the Man of Steel’s franchise could do with a complimentary boost from the very happening Batman movie franchise.