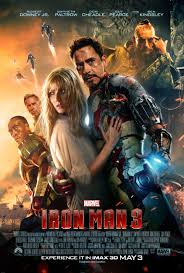 In a summer filled with so many explosive blockbusters, there are several movies that everyone has penciled in to watch…one of which has got to be Iron Man 3. I guess it was very highly anticipated not only because the Iron Man movie franchise was perhaps the most successful superhero franchise of Marvel movies, it is also a sort of first follow-up movie in the aftermath from The Avengers.

The third installment starts off rather philosophically with Tony Stark bemoaning how we sometimes create our own demons. We are taken on a flashback to 1999 where we are introduced to a bio scientist Maya Hansen, who is doing some research on Extremis, which is some formula with regenerative properties. They also have a brief encounter with Aldrich Killian, who offers both Stark and Hansen to join his company – Advanced Idea Mechanics (AIM). Stark dismisses the offer and inadvertently embarrasses Killian as well.

In the present, a very restless Stark is seen performing more research and tinkering on his Iron Man suits – latest being Mark 42 (!!!…if my memory is correct, we only saw Mark 7 in The Avengers!!!). Obviously still shaken from his near-death experience as seen in The Avengers, it is clear that all is not well with his relationship with Pepper too. We are quickly introduced to a series of frightening Al-Qaeda-ish threats and boastings on TV from a sinister terrorist known only as The Mandarin. This villain and his organisation called The Ten Rings has been responsible for a series of unexplainable bombings, which may be related to the Extremis, all over the country.

When one of such bombings leaves Stark’s security chief, Happy (seriously!) very badly injured, Stark takes it rather personally by issuing a live threat on TV to The Mandarin, as well as giving him an open invitation by giving out his home address. The Mandarin responds very quickly when Stark’s home becomes a direct target of the Mandarin’s attack helicopters.В This incident drives Stark to relentlessly pursue The Mandarin and bring him down.

It may sound like a rather simple storyline of a superhero bringing down a terrorist to justice but along the journey, we are offered a glimpse of Stark’s inner battles and discovering more about the man inside the Iron Man Suit.

Personally, I didn’t quite enjoy IM3 as much as I did with the very first IM1 although it was probably better than the thoroughly disappointing IM2….which brings a lesson that sometimes we do not need VVIP villains like Whiplash or The Mandarin to make a good movie. I still remember Iron Man’s adversary in IM1 was only the Iron Monger, yet other elements within that movie connected well to make it fantastic.

In summary, these are some of the key points which I liked and didn’t like about IM3:

1. Trauma caused by events in The Avengers gave it В some satisfactory link and continuity with the on-going Marvel cinemaverse.

3. The veryВ villainousВ twists throughout the movie. Always enjoy movies that surprises me!

1. Personally I felt every single scene with Stark and some kid in a small town didn’t work. The dialogue felt really awkward and very artificial. The tried and tested superhero-kid chemistry usually works but in IM3, it was probably one of the weaker sub-plots.

2. Entire movie was pretty humourless. Read: dull. Perhaps the director was trying to create and maintain that tension throughout the movie but to me, a comic book movie should at the end of the day also have some erm, comic elements too!

3. Movie tries to be too philosophical and dark, focusing on Stark’s human self and lesser on the armor….very similar to what Christopher Nolan did with The Dark Knight Rises masterpiece. Unfortunately, whilst Nolan successfully built the momentum of his Batman version over a trilogy, IM3 failed to stir that gripping aspect and idea in this film.

4. Iron Patriot. Almost pointless and role-less in this movie. I could actually feel the pain everytime he appears. Almost like watching a cheap side-kick prancing around. Sigh.

5. Casting. Apart from Ben Kingsley (superbly casted as The Mandarin), everyone else didn’t really look comfortable on set at all. Hmmmm. 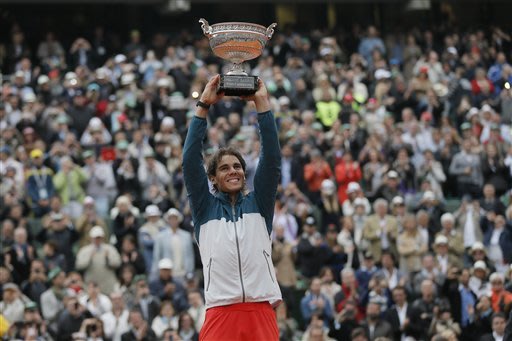 1. Roland Garros is definitely a great place for any player who intends to mount a serious comeback from injury or long lay-off. Just ask Serena or Nadal.

2. Djokovic is slowly but surely adapting to the sandy, slow surface of the French Open as he inches closer and closer to defeating Nadal here. Kinda reminds me of how Nadal tried many, many times, with each try getting closer and closer and finally defeating Federer at Wimbledon.

3. If Serena Williams can win on CLAY, she will be tough to beat for the rest of the year.

5. It’s no joke. Rafael Nadal is still the King of Clay and he is back!